On March 4th 2009 Des Lewis (DF.Lewis) will be announcing who the anonymous contributors to Cone Zero are. His competition is still ongoing for whoever can guess who-wrote-what and the first prize is a nice crispy fifty quid! Can't be bad even if you just write the names and stories on pieces of paper and draw them out like a lottery. Won't cost you a thing, only an email to: COMPETITION

The authors in a random order:

"The Point of Oswald Masters"

"Always More Than You Know"

"Going Back For What Got Left Behind"

"How To Kill An Hour"

Got to be worth a go, or don't you need fifty quid?

After uploading a novella of mine (A Cloud Of Madness) onto the new page-flipping website Issuu, I mentioned it to Steve Upham my publisher (Screamingdreams Publishing) and he took a look and was impressed, so much so that he has uploaded his 2008 issues of Estronomicon to the site and you should see them, they look very good indeed.

I have an example here, it is his 2008 Halloween issue (which also includes a story by me). I really like this format and it is so easy to use and much kinder on the eyes.

Steve will also be uploading a number of Ebooks in this format and all new Estronomicons as they are published. Look out for his next one which is due out soon and has a stoy of mine in it entitled 'The Finiteness Of Anagrams' If you like creepy, bloody stories - this this one for you!

Time is running out for voting on The Dead Of Night Award on Steve's site too, this is a vote for the best author and artist of the year, needless to say, a vote for me as author would be appreciated :) 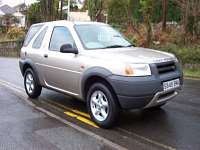 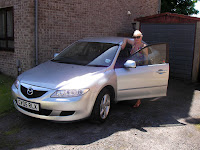 Can anyone beat that? In total I make it forty vehicles so far and that's if we've remembered them all!
Some photos are our own cars some are stock photos: 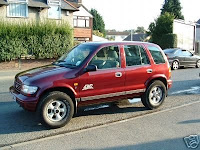 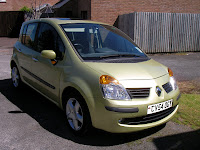 Here's a conundrum for you SF fans and any astrophysicists out there. I'm writing a SF novel in which my method of travel is by folding space. For example, you want to go from A to B; both points are at opposite ends of say, a piece of A4 paper. Instead of traversing the whole paper you fold it until the A and B points meet and then you step across.

Right, say this method is feasible, how about this:

Messier 87 which was discovered by Charles Messier in 1781 is a large elliptical galaxy about 55 million light years from Earth. If 'something' happened there which was observable from Earth and it happened now then we wouldn't be able to see it for 55 million years because of the time it would take for the light to reach us from that 'something'. However, imagine we could fold space as described and between us and the event we had the equivalent of a string of Hubble-like telescopes which folded the information received in series, one to another, across the galaxy until it reached Earth, almost instantaneously. So, would we be able to witness the event in more or less the same time as it was happening by using this folding network?

Answers in less than a thousand sentences please :)
Posted by Bob Lock at 5:38 PM 3 comments:

Woke up this morning to all this white weird stuff!
Looks like global warming is on hold....

And for all you UFO hunters out there,
take a look at the picture 'My Drive'
is that a fleet of UFOs in the top left-hand corner?
I hope if the come to visit me tonight
they'll warm up their a**l probes first...
Posted by Bob Lock at 1:44 PM 2 comments: