Whoohoo! I did it! They Feed On Flesh finally ended on 50,893 words and took my zombies from the initial outbreak of the plague (discovered in an unknown tomb in The Valley Of The Kings in Egypt) to Britain, then the rest of the world, onwards to Mars and finally back in time to another version of Earth.
Phew... the most I've ever written in one go and now I need to go lie down in a dark room for a year or two...
Anyone out there interested in publishing a zombie romp?
:-)
Posted by Bob Lock at 5:07 PM 1 comment:

Well I've managed to get 41,307 words down in my NaNoWriMo story and have got five days left to get the other 8,693 so I might even do it! My zombies however have now left Earth and are on Mars (ran out of ideas on Earth) and soon they will be reaching for the stars!
Posted by Bob Lock at 10:22 PM 2 comments:

RevolutionSF had a draw-a-squid competition to help promote Jeff VanderMeer's new book Finch. In a moment of madness I entered, but believe it or not I was one of the runner-ups with this magnificent beast:- 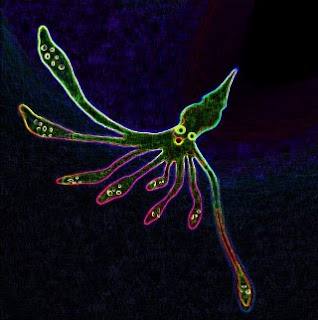 The winner and other denizens of the deep can be found here: RevolutionSF
Posted by Bob Lock at 7:24 PM 3 comments:

Mired in the mud of writer's block

Argghh!! I'm struggling... I've got 29,284 words written and uploaded to NaNoWriMo but I'm beginning to fizzle out, to get a stitch in the side of my inspiration. I'm hoping to get a second breath and plough on to the line but it will be close!
Posted by Bob Lock at 7:16 PM No comments: 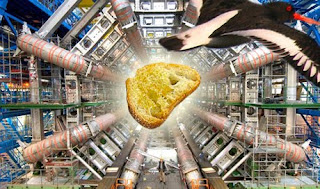 D.F.Lewis (Des) has been writing a number of interesting and surreal short stories as a tie-in to his well-received anthology, Cern Zoo (Nemonymous 9) and all day I've had an idea rattling around my head for a short of my own set in his world. So, as a break from NaNoWriMo today and my zombie-fest of shorts I wrote one for Des and he's kindly published it on his website here:

The 90th Intervention Of Natural Webster

I hope you enjoy it and also Des' too

NaNoWriMo Word Count
17,957
Well, we're twelve days in to NaNoWriMo and I've managed to get 17,957 words done, that, in itself, is a record for me as I am a very slow writer and prone to getting distracted. The main problem for me now is keeping the pace up as ideas are beginning to dry up.
Posted by Bob Lock at 5:13 PM 3 comments:

Steve Upham of Screamingdreams has a special edition Estronomicon out entitled The Sketchbook Edition. There are a couple of formats available but I quite like the Issuu one which is a page flipping version and can be found here: Estronomicon for those who prefer pdf then go here: PDF Version

I'm pleased to say I have a short story of mine in this edition.

It's called 'Man Of Stone'

NaNoWriMo Word Count
9,930
I've slacked off a bit over the last day or so, firework party and this afternoon
Wales play rugby against The All Blacks!
I can't write when that's on!
COME ON WALES!
Posted by Bob Lock at 3:04 PM No comments:

Okay, uploaded my first couple of chapters to NaNoWriMo this morning along with the opening few lines of the first chapter. The site tells me that I've done 520 words, I'll need to do around 1,800 daily to reach the target... ouch! 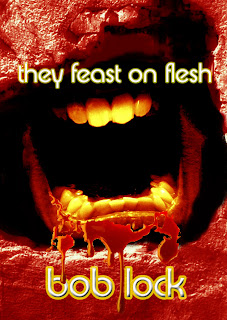 If you want to check me out I'm here: They Feast On Flesh!

I'll try and update the word count at least weekly if not every few days, I've put a widget in top right corner of blog but it doesn't seem to be working. Either I've done it wrong or the NaNoWriMo site is overloaded!
Posted by Bob Lock at 12:01 PM No comments: