Had a day out in Cardiff today with Paul Lewis. We attended the second year of The Scardiff Event in The Masonic Hall and thoroughly enjoyed it.

There was a lot of cosplay going on, some creepy, some scary, some VERY scary, some sexy and then there was Paul and me...

Met some old friends, including, Steve Upham, Steve Lockley, Mark Howard Jones, John Llewellyn Probert, Tim Lebbon, Chris Teague, Gwilym Games and some new friends were made, mainly ones I already knew online but haven't met in the flesh (and bones and gristle...) such as Adam Nevill. David Price, Wayne Simmons and Teresa Derwin of Knightwatch Press, the publisher of the Potatoes Anthology.
There were snakes and spiders there too but we decided to give them a wide berth! 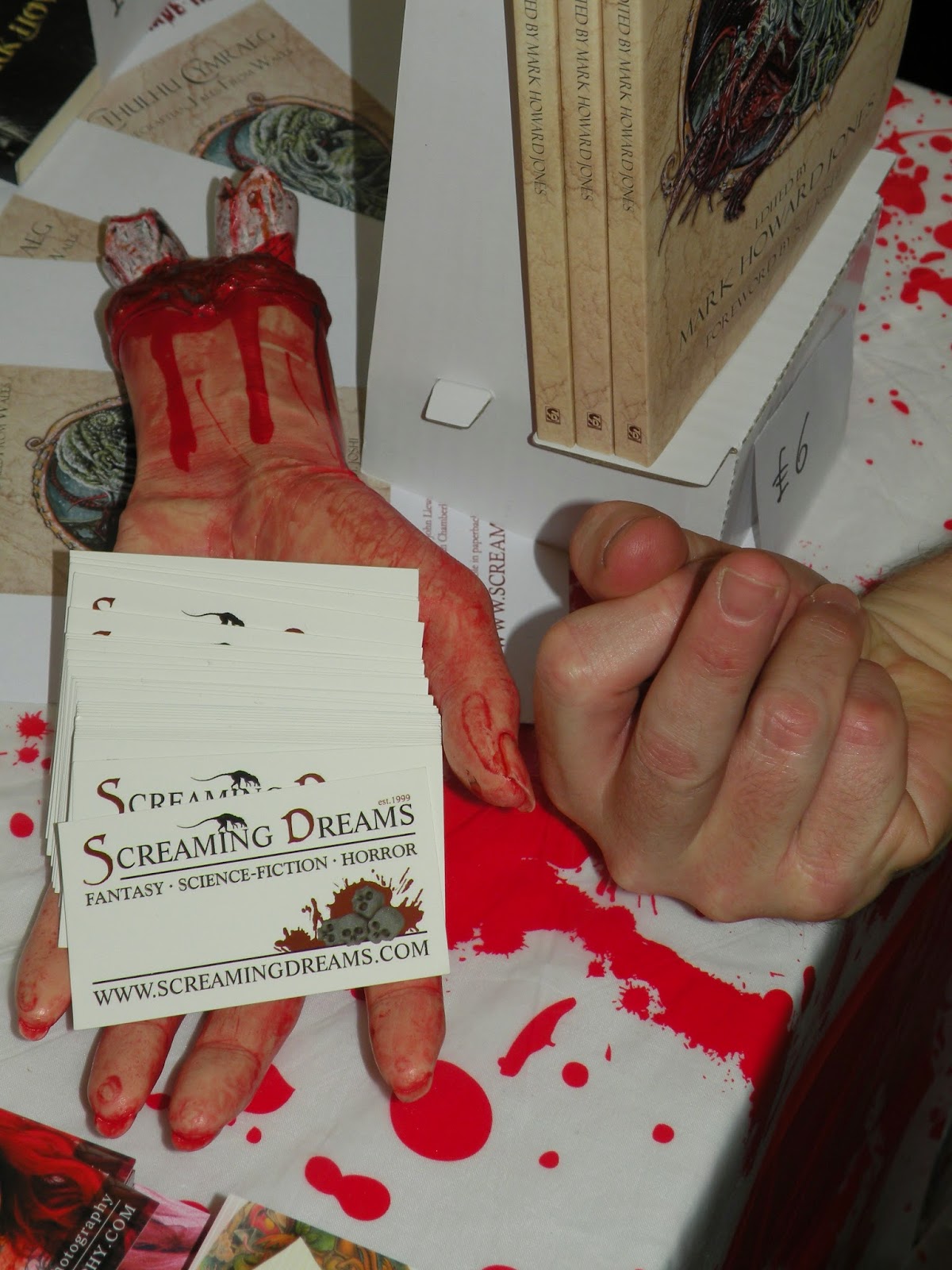 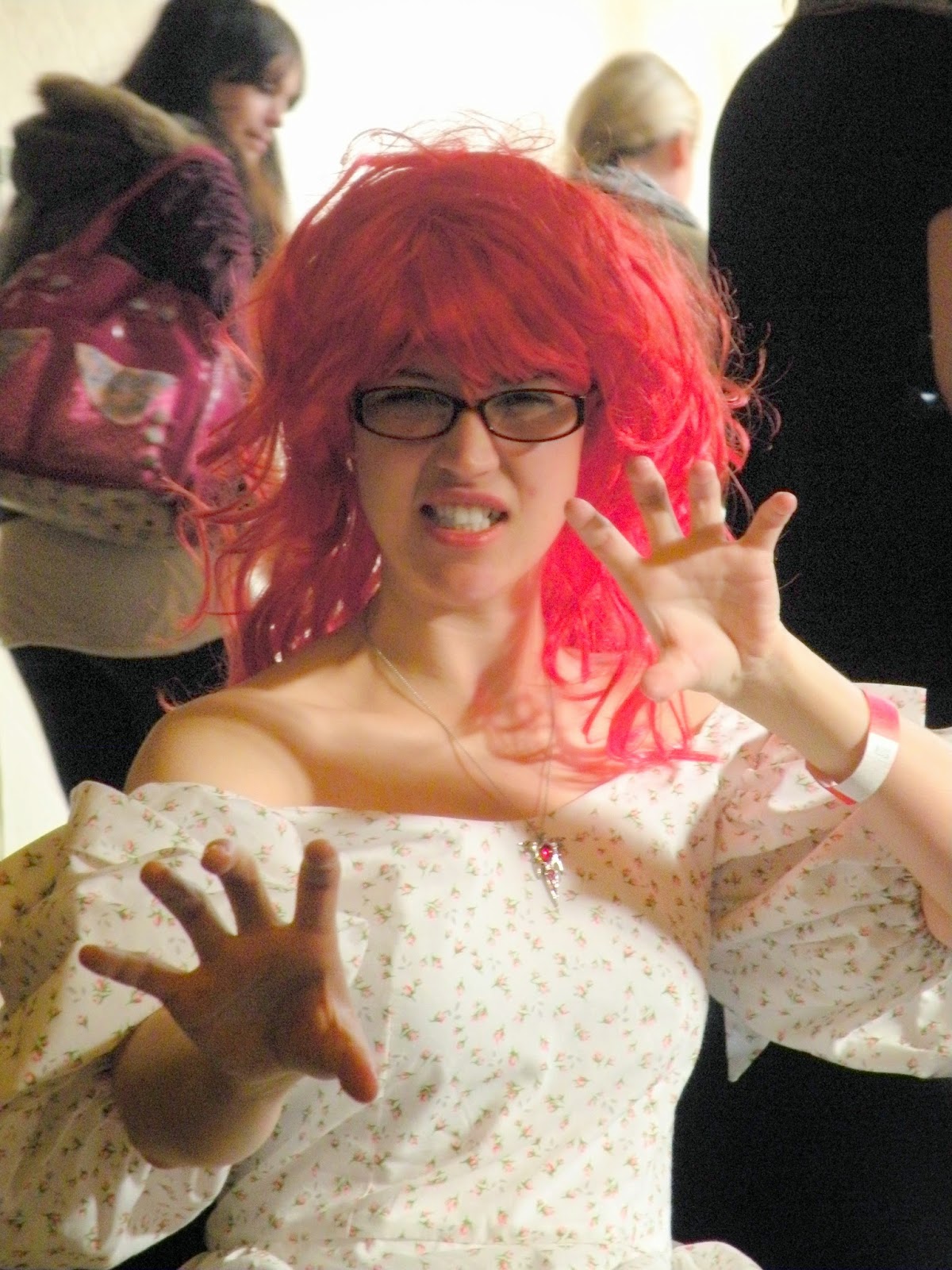 A young lady with a craving for our blood...

Lunchtime was spent at Carluccios where the food was excellent and reasonably priced too. I was surprised how busy the centre of Cardiff was on a Sunday, nothing like the ghost-town of Swansea where the only things you'll see moving are the tumbleweeds, empty fast-food packaging and the zombies sobering up from the Saturday night binge in Wind Street.

Chuck Wendig has set a horror competition over at Terrible Minds.Com SpammerPunk The challenge this week was to write a horror story as spam mail. Here is my offering:


WE PURCHASE ANY ORGAN

Congratulations, your email address has been chosen by our computer from a worldwide database of organ transplant patients. We have great satisfaction in offering you a choice of the following:

To qualify for any of the above please sign the attached form of consent for us to harvest from you one of the following:

Immediately upon receipt of your signed consent form we will arrange for our team of highly qualified surgeons to visit you in their state-of-the-art mobile surgery to collect your chosen donation.

YES, YOU DON’T EVEN HAVE TO LEAVE HOME!

Once you have recovered from the harvesting operation (usually only a matter of weeks) be assured we will return with your choice of organ to be transplanted.

Contact us now as this offer is for a limited time only.

Was March really the last time I scribbled on this blog?  It certainly looks like. As you've probably guessed I haven't done much writing lately, not even blog writing. I'm in one of my slow periods when my muse seems to have packed her bags and gone on vacation for a few months. I hope she gets back soon because I have a stack of unfinished writing to get on with.
Well, I have written and finished some things, mostly short stories, one-liners (I sent to Newsjack but didn't have any success with) one was for example :


Pope Francis' skull cap has reached over a hundred thousand euros on Ebay. We interviewed a group of nuns in St Peter's square who expressed a worry that it could become a habit.

Unfortunately it didn't impress them, neither did my others :(

Other news is my story 'King Edward's Mines' is out in the Knightwatch Press Anthology 'Potatoes'  and the book has received favourable blurb and two 5 star ratings so far on Amazon. 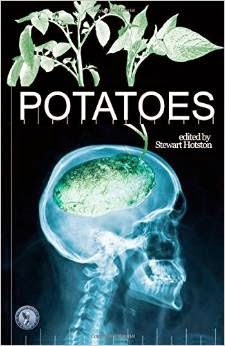 Finally I have two horror short stories coming out in Tickety Boo Press's Anthology 'Malevolence' which should be released soon. 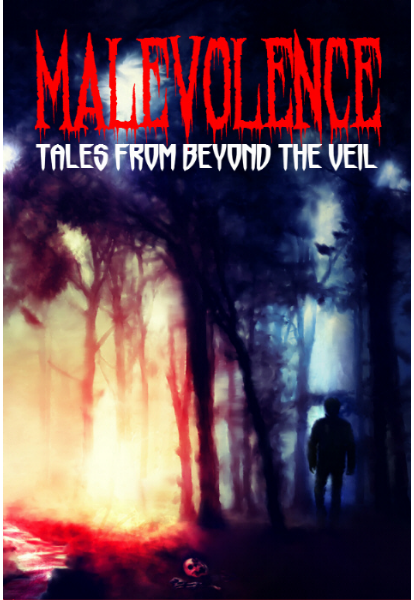 So I suppose I have been writing, it just seems that I haven't done enough. Perhaps now that winter is coming (wow that's a good phrase, perhaps I can use that in a story somehow) I'll be able to concentrate a bit more and not have the distraction of a lovely sunny day to keep me from the keyboard. Bye bye for now :)