I have been and always shall be your friend...

... especially if you read everything I write !

Stumbled upon this ST thingy and just had to mess around with it :) 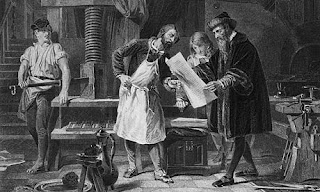 The Guardian has decided to publish an anthology of poems chosen from a number sent into them by readers over the last year or so. Billy Mills, who instigated Poster Poems on The Guardian site, and Sarah Crown who is the editor of Guardian.co.uk Books are the motivating forces behind this venture. Sarah also reviews poetry regularly for the Guardian Review. Anyway, I've always enjoyed sending in some of my poetry to this particular venue, and low and behold, two of my poems have been chosen to go into the new book!
The first is called 'Home thoughts from another planet.' and, as you can probably guess is a SF-based poem! Woohoo! The other is called 'Celsius reaches double figures' and is about spring and the promise of summer (that's the couple of days a year we get when a big yellow thing appears in the sky!)
Posted by Bob Lock at 11:33 AM 2 comments:

I Boldy Went To The Cinema! 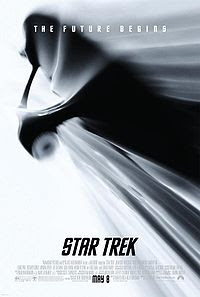 Last night I bit the bullet and forked out to see 'Star Trek' in The Vue in Swansea. Between us (myself, wife and brother-in-law) we spent about £30 for a couple of hours sitting in the luxury seats drinking a couple of Cokes and eating sweets, but I have to say, I'm glad I went to the cinema to see it.
The large screen and great sound set-up is what this film needs, the scenery and effects would probably be lost on anything other than a big screen.
The storyline was very well done and I won't go into details as I wouldn't want to spoil any surprises for those who haven't seen the film but will just say this, it has opened a whole new future for the ST franchise and I could easily see this film spawning yet more films or even a new series.
I thought Chris Pine did a fine job portraying the young James T. Kirk but I would have liked to have seen him mimic Shatner's weird phrasing of sentences just once or twice. Someone who did seem to capture his previous character well was Karl Urban who played 'Bones', even managing to get in a 'I'm a doctor not a...'

I was disappointed with John Cho who played Sulu and Anton Yelchin who played Chekov and thought Simon Pegg could have done better with his attempt at being Montgomery Scott.

However, hats off to Zachary Quinto who played the young Spock, he was excellent and for me was the one who not only resembled his character the best but was what I imagined a young Spock to look like and also captured his characteristics the best. I did think I wouldn't be able to get Silar from Heroes out of my mind but within a minute or two Quinto had me convinced he really was the young Spock.

Zoe Saldana played Uhura and yet again I didn't think she captured the essence of the part but I did enjoy her performance all the same and considering the way the story goes thought that in the end she made the part her own.

Leonard Nimoy made a guest appearance and when I saw him amongst the young and vibrant new cast it just made me realise how long Star Trek has been around and how time waits for no man or Vulcan...

Des Lewis has released a graphic of the cover for the upcoming anthology CERN ZOO and here it is: 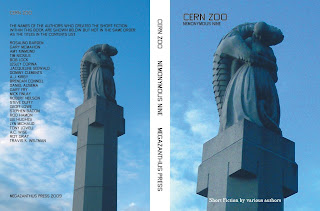 There's also a list on the reverse of all contributors, oh wait, who is that at number five?