I'm a guest over at Steve Lockley's Blog

Steve Lockley the famous Welsh writer/editor and the first person to accept a story of mine and publish it (yes, he's the one to blame) has had guest bloggers over on his site during the month of June and will continue to do so into July. Today, 22nd June he scraped the bottom of his apple barrel and instead of finding Jim Hawkins hiding there came up with me. So, if you want to find out what makes me tick them pop over to here and find out: Steve Lockley

Flames of Herakleitos on Kindle 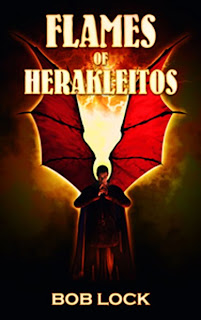 For all you techie-types, 'Flames of Herakleitos, my first novel, a dark fantasy set on our world and a parallel world ruled by mages and their golems can now be downloaded to your Kindle. I've tried it on my Android phone too and it works pretty well. The first few chapters are free to download and try, Go here: KINDLE VERSION

I was on the TTA Forum and one of the contributors there, Mike Alexander mentioned that The Beeb were asking people for their eight Desert Island Discs and he had uploaded his and had also put them on his blog. I thought it was a great idea and so did the same. Here are my eight and some of the reasons behind their choices.

Rondine al nido is about a little swallow that returns every year
at almond blossom time, but Pavarotti sings that his loved one
has left and never crosses the seas or mountains, like the little swallow -
2/

Bridge over troubled water - Anna and I played this album non-stop when we were courting all those years ago. Simon and Garfunkel, masters.

This is I Pooh an Italian group which we fell in love with when we lived in Italy.
This group started in 1966 and I think they are still together, making them one of the longest lasting pop groups ever.

Nils Lofgren's Black Books. I've always liked Lofgren, especially Shine Silently but when I heard this on an episode of The Sopranos I was blown away. Another poet like Springsteen and his guitar solo on the end of this is superb If ever I aspired to playing a guitar it would have to be as good as this or it just wouldn't be worth bothering. Marvelous playing, bloody marvelous!


Okay, this could be cheating a little but I can't pick just one piece of music from Jeff Wayne's War Of The Worlds although Forever Autumn is certainly a favourite. This album witnessed the growing up of our children and was something we'd settle down to listen to with the lights out and the curtains drawn whilst outside it blew a gale. Juliana my daughter took me to see it performed live in Cardiff for my 60th birthday even though she was so very ill.


Emerson Lake and Palmer's Lucky Man was mind-blowing, great lyrics, fabulous tune, excellent guitar, fantastic drums and 3.23 minutes in the first Moog solo ever recorded and I remember thinking 'what the hell is that!' when I first heard it and the sound of it buzzing from left to right speaker!

It was hard to find this particular recording of Shenadoah (Across the wide Missouri) by The Mormon Tabernacle Choir but find it I did and it is well worth a listen. There are other arrangements but this full orchestra/choir version I think is outstanding. I am not particularly religious-minded and I'm not a Mormon but you've got to hand it to them, they can certainly sing. BTW, I have no idea who the people in the video are but I'd like to thank them for uploading that version of Shenandoah to Youtube and wish them my best, they seem a nice American family.

Finally I think you are allowed one luxury item to take with you on a desert island. Hmm... I think I'd like to take my trusty metal-detector (solar-rechargeable) so that I can spend my days looking for Captain Flint's buried treasure :)

What are your Desert Island Discs?
Posted by Bob Lock at 4:14 PM 3 comments: