Clearing out my computer room today I came across an old Third Alternative magazine (now Interzone/Black Static/Crimewave) from winter 94/95 with fiction by Mike O'Driscoll - Rick Cadger - Mark McLaughlin - Wayne Edward - PJL Hinder - Julie Travis - Tim Lebbon and a guy named Neal Asher. I asked Neal if this was his first publication as I knew he started off in the mid 90s and in an email back to me he said:


I think it was my second or third publication. My very first was in Back Brain Recluse in 1989 – a short story called ‘Another England’

Neal's story in this is entitled Cavefish and is perhaps more horror than sf but you can see the beginnings of his love of strange aquatic creatures starting to flower.

Well I promised you a guest blogger and here he is, safely esconced in my green leather wing-backed chair with a cup of tea and a plate of jammy-dodgers on a small table at his side. I've spent all morning cleaning the place and turning the heating up as I mistakenly thought he was doing the blogging naked but now realise I was thinking about Angelina Jolie who is my next guest...

So, without more ado and fantasy imaginings (not about him naked...) I introduce you to Steve Lockley, a most repected writer of dark fiction and the man responsible for publishing my first short story and setting me off on the writing road.

Hmm don’t know where Bob got the idea that I would be blogging naked, or even that he needed to tidy up.

I’ve known Bob since Paul Lewis and I edited the first in the Cold Cuts series of horror anthologies back in 1993 and I accepted his story ‘The Leaf in the Stone’. 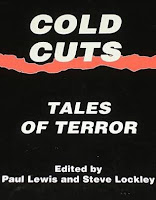 The idea of those anthologies would be to promote some of the horror writers based in South Wales that were just starting to emerge. This seems like a good time and place to look at who has survived from those days and is still carving out a career as a writer.

It has taken far too long for Bob to start to break through, but in the last couple of years he’s seen a couple of books out from Screaming Dreams and his work is reaching a wider audience at last.

I’ve worked on a number of projects with Paul Lewis since that first anthology including the novels The Ragchild and The Quarry along with a handful of short stories many of which are due to be pulled together in a collection from Gray Friar Press. His first solo novel, his Arthurian tale The Savage Knight is due out in September.

Rhys Hughes seems to have so many books coming to fruition that it’s hard to keep up with him. Rhys ploughs his own furrow which rises above the commonplace if you’ll forgive the mixed metaphor and produces work that never ceases to challenge as well as entertain.

Neither Gary Greenwood nor Mike O'Driscoll is anywhere near as prolific as they should be but their work regularly appears in the most enviable places. While others like Brian Willis who edited the award winning anthology Hideous Progeny are far too quiet.

TV and film writer Steve Volk has been getting the recognition for his short fiction which has been long overdue while Tim Lebbon has the Midas touch at the moment. A new novel or TV/film deal seems to be announced every few months. He’s worked hard for it and his success is much deserved

Publishers have come and gone. Razorblade Press is no more, and Sarob Press has relocated to France, but the aforementioned Screaming Dreams along with Pendragon Press and Mortbury Press all based in Wales publish some of the best Horror and Science Fiction around.

And me? In addition to the stuff I’ve done with Paul Lewis, I’ve returned to writing short stories on my own, finding a freedom that I had lost for a while. There’s also a new series of supernatural mysteries featuring forensic investigator Sally Reardon that I’m working on with Steven Savile which has been gaining a certain amount of attention. The latest, ‘Missing’ is only being published electronically, so all you good folks who’ve had a Kindle or similar device for Christmas could do worse than get hold of it. That’s after you’ve bought a copy of The Empathy Effect of course.