Hello everyone, first of all Happy New Year 2014 to you! (A bit late I know :-) )
2013 wasn't a bad year as far as writing was concerned, especially short stories for anthologies.
I managed to get published in a couple of anthologies: Astrologica - Cthulhu Cymraeg  and have a few in anthologies coming out in 2014 - Ticketyboo Press's Malevolence will have two ghost stories of mine.
I'm also hoping to have a SF short for their Space – Houston We Have a Problem antho. Then Fringeworks should be publishing their mad 'Potato Anthology' in 2014 too and my story King Edward's Mines will be one of the weird tales in it.
Regarding my novel writing *sigh* I must have snail DNA in me somewhere because the novels are progressing so slowly. However, they are moving, albeit lethargically and who knows? They might be finished this year!

Addendum! D.F.Lewis has pointed out that I was in another anthology!
Horror Without Victims
and a fine antho it is too... please excuse my miserable memory!

In the meantime, I am one of a short-list of five writers in a competition set by the media group and publishers Start Publishing with a SF short of 500 words called The Shell Game. The brief was to write a story based on Neal Asher's Departure cover. 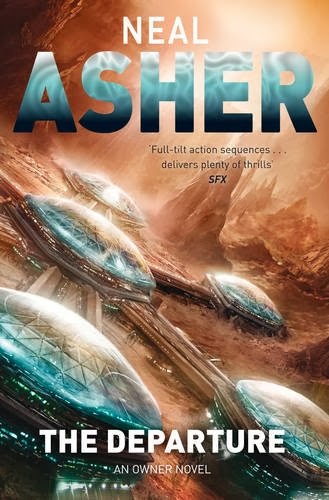 Start Media is the group that made The Europa Report and I'm hoping the prize is a trip to Europa :-P
If you'd like a free read and if you think my story deserves a vote here are the links:
Short Story Finalists - Stories where you can leave a vote and comment.
StartPublishing - Twitter Vote
Facebook StartPublishing - Vote on their Facebook wall