Took a run up to Hay-on-Wye today for a wander around the town and the festival. Was pleasantly surprised by the great organisation of the event. I thought there'd be queues and bottle-necks, especially with the traffic but found a £3 parking spot in a field right next to the show and it only took me two minutes to walk to the entrance. Most of the show is under cover and has raised walkways but the central area which was grass was dry and when meeting up with my sister Sue, brother-in-law Tony and niece Holly we were able to sit on the grass for our picnic lunch. Then it was time to spot the celebs. First up was The Princess of Wales, Camilla (who I nearly walked into until I was politely ushered to one side by a body-guard). Next was Susannah Reid the newsreader who was having a quiet coffee with her three young boys, I was tempted to ask for an autograph but didn't want to bother her (and look a nerd) :) Then I spotted Maureen Lipman who saw me taking her photo and from the look on her face must have thought I was a stalker...
But the highlight of the day was when we were browsing through some books in the festival my sister found a copy of 'The Empathy Effect'! Now how weird is that! But weirder than that was when she started waving it around and shouting for me to sign it and the puzzled looks that the people around us gave her...
Finally we had a stroll around the town and visited some of the fine bookshops there, the castle bookshop is a magnificent old structure (much like myself) but I couldn't find anything that tempted me. A great day out, go if you can, it's on until Sunday 5th June. 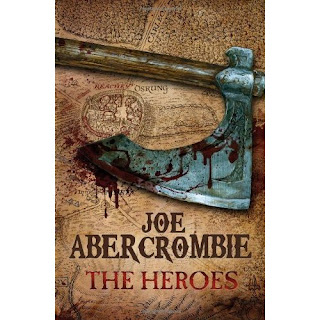 If you are watching GRR Martin’s A Song Of Fire And Ice and enjoying your foray into the world of fantasy then you’ll need to get your chain-mailed arse down to your nearest bookshop and get Joe Abercrombie’s ‘The Heroes’ as it is a cracking good read. Yep, I’m blogging about someone else’s work again and not my own, but it is such good work I need to spread the word around so others can enjoy it as much as I have. Some time ago I was lucky enough to have Joe answer five questions on my blog, something he did which much aplomb, even though the questions were way... way... way... outside the norm he didn’t flinch and answered them in good spirit. Much like some of his characters in ‘The Heroes’

When I bought the book I imagined it was his main protagonists that The Heroes referred to but I was wrong. The Heroes is a group of standing stones atop a hill under which there is the suggestion that great men are buried. Much like Hamburger Hill in Vietnam this particular hill with its eerie set of standing stones, which I imagine in my mind’s eye to be similar to Stonehenge, is occupied by a party of men fighting for The Union, one side in a war that started in his previous books, The First Law Trilogy. Trying to take this hill and its standing stones is Curnden Craw and his crew who are fighting for Black Dow who has proclaimed himself King of the North the other side in this conflict. Against a background of bloody battles fought by men who are lead by incompetent leaders, who have no thought to the cost in lives that taking and maintaining this hill and its surrounds will demand, more than a couple of times I was reminded of the catastrophic leadership in World War One and the terrible losses incurred.

I just wish I could write half as well as this, and then I’d be pretty happy... 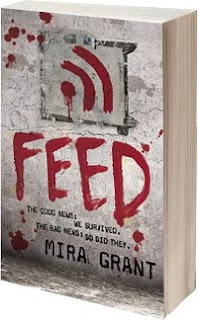 Regular visitors to my site will know that now and then I’ll blog about a book, magazine or author that I’ve read and enjoyed. Some of those in the past have been people like, Neal Asher, Joe Abercrombie, Interzone, and Black Static etc. Now I have another book to recommend, it’s ‘Feed’ by Mira Grant and is basically a ‘zombie book’ but an interesting one and, as I’ve been writing a few zombie stories myself (I’m in the new zombie anthology Holiday of the Dead, with the great John Russo, co-writer of Night of The Living Dead) quite appropriate.
Feed is set around the year 2040 where everyone will ultimately become a zombie when they die, whether you’ve been bitten or not the virus is in your body and will mutate you upon your death and you will re-animate. This has to be the best and most convincing way to explain how zombies can exist that I’ve read so far. In 2014 two cures were found. The first was a cure for cancer; the second was for the common cold. However the combination of the two cures succeeded in making the human body hard to kill, in fact it resurrected it after death and gave it the urge to... feed.

The other thing I enjoyed in the book was the way blogging has become the top-of-the-food-chain method of reporting the news and the two heroes in the book, brother and sister, Shaun and Georgia are at the pinnacle of that food chain, but whilst reporting on an up-and-coming senator who is hoping to be the new president of the USA they unknowingly put themselves in harm’s way upon discovering the truth about the zombie outbreak. One little quibble I have though is that the bad guy in the story is easily discovered, but... this could be a trick on the author’s part as Feed is just the first book in a trilogy and I’m sure there are certainly more villains to be discovered.
Posted by Bob Lock at 8:25 PM