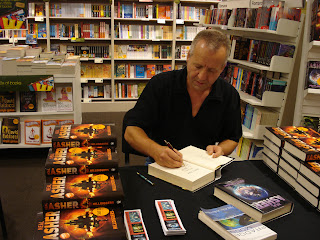 SF author Neal Asher has started a writers' workshop over on his website where he's uploaded a part of a story of his that he never included in his novel 'The Voyage Of The Sable Keech', it's an interesting sub-plot that never saw the light of day and well worth a read. He's also had a few uploads from fans (I'm one) of their own work in progress and has given some feedback and valuable advice on them. I've been writing a hard sf story 'The Dam Across The Stars' for a number of years (yeah, I'm slow) and have a total of about 55,000 words done but have hit a writer's block with it. However, after sending in three samples of about 1,500 words each and getting some excellent input from both Neal and his readers I feel better about the story and hope to unblock that damned block.
To see what's been uploaded and to comment or perhaps even give the workshop a go yourself with something you've written, go here: 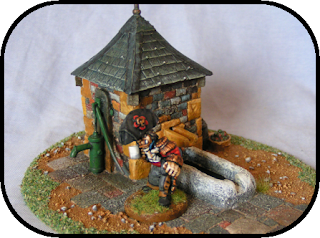 If you like Dungeons & Dragons or modelling fantasy figures then why not take a stroll over to Barking Irons where my brother-in-law Tony Harwood is giving a masterclass on how to build a 28mm scale building using materials that even Blue Peter aficonados wouldn't have dreamed of using. Tony has been into modelling for some time but my sister made him give up his cat-walk days a long time ago and so now he contents himself building fantasy scenarios and the like, all of which are a sight to see. We used to play D&D together with a gang of like-minded friends years and years ago and I have to admit that I miss the zany situations we used to find ourselves in. Anyway, here's the link, go take a look and tell me what you think :) LINK

I've put a piece of Flash Fiction up on Indies Unlimited where there's a competition on who can best describe the photograph below of a brig entering harbour. 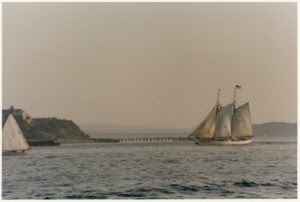 Here is my offering, if you think it's worth a vote I'd appreciate you doing so, voting ends 5pm Thursday 9th Feb, thanks :)

‘Captain, we approach Whitby, would you prefer to pilot us into harbour yourself or shall I?’ asked the ship’s first mate.
Briggs looked up from the parchment on his desk. ‘I will take us in. Prepare the cabin for our passenger and make sure his instructions for the stowage of the cargo is adhered to. He was very specific about that; do it well.’
‘Strange instructions, Captain. I mean, our hold is water-tight why would we have to make sure it is sealed from all light too?’
‘The reasoning behind Mr Stoker’s instructions does not concern me. The man’s paid well to transport him and his cargo to Gibraltar,’ Briggs replied. ‘Come let me see what you’ve done in preparation.’

The inside of the hold was draped in heavy black cloth secured to the wooden walls by large flat-headed nails. Even the tar-sealed hatch had cloth waiting to be nailed over, for when it would be put in place.
‘A waste of hold space, Captain. All that room for what? A wooden packing case?’
‘Ours is not to question Stoker’s motives. Satisfy your curiosity with the knowledge that when we deliver our guest and his strange cargo to Gibraltar safe and sound we will receive a bonus large enough to slake any query or doubt you have in mind,’ Briggs said placing a hand on his first mate’s shoulder. ‘Now, let us take the Marie Celeste into Whitby with skill and care and show this port how it is done.’