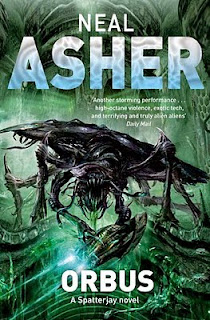 Browsing Neal Asher’s blog I noticed a review he’d posted of his novel Orbus and remembered I had also done a review when it was first published but never posted it on my blog, so here it is.

Ok, get the following ingredients: someone who’s been an engineer, a barman, a skip lorry driver, a coalman, a boat window manufacturer, a contract grass cutter and a builder, then mix them all together and you should have... Neal Asher, science fiction novelist.
I gave it a try and all I ended up with was this horrible slurry of blood, flesh and bones, I must be doing it wrong...

Review of Orbus by Neal Asher
Centuries old, Captain Orbus, infected with the Spatterjay virus which virtually makes him immortal, has taken a position onboard The Gurnard, a cargo vessel which is hoping to trade its wares in a part of the universe called The Graveyard. This is basically a no-man’s land (or no-crustacean’s land) where neither The Polity nor The Prador (huge, nasty crab-like creatures with a tendency to rip off human heads and limbs and eat them first before asking any questions or even being introduced to their next meal) have control and only entrepreneurs with the nerve and fire-power to keep themselves alive and safe rule. Orbus is trying to escape a violent and sadistic past and hoping to forget his penchant for torturing and causing suffering to almost anyone he comes into contact with. Traversing space with Orbus is an old shipmate of his called Drooble, who is himself another virus-infected individual or, Hooper, as they are known and his tastes have more of a masochistic flavour in that he actually enjoys being tortured by his old captain. Add to this strange pair, the Polity war drone Sniper and his faithful sidekick Thirteen (a sub-mind of the previous Spatterjay Warden A.I. that’s shaped like an iron seahorse with topaz eyes) who are stowaways on The Gurnard and you have The Four Musketeers From Hell and they certainly need to be as once in The Graveyard things escalate from just trading wares to fighting for their lives against a rapidly mutating Prador Vrell, an angry Prador King and his entourage, the Golgoloth (a monster that even the Prador are frightened of) and finally something that has laid dormant in the Spatterjay virus for five million years just waiting for the opportune moment to return. And guess what?
That moment has just arrived...
This is one of those books that you’ll want to read in one sitting and once finished you’ll clamour for more. Neal Asher at his bloodiest and best. Get it!