Review of The Savage Knight 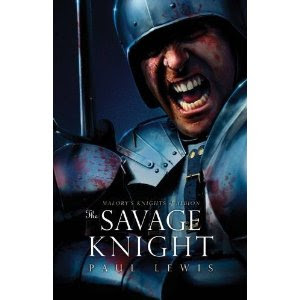 Regular readers of my blog will know that now and then I’ll review a book that I’ve read and put in my tuppence-worth (that’s two bits for American readers!) for anyone interested. I tend to review only the books that I’ve enjoyed reading and can recommend. I don’t review books that just didn’t ‘do it for me’ so I’m pleased to say that Paul Lewis’ The Savage Knight (Malory's Knights of Albion) is one of those tales that did ‘do it for me.’

It is said that King Arthur chose a round table around which his knights could congregate because there would be no head of table and therefore his knights, mostly all barons, would not argue over who sat where as no one would be sitting in a higher or lower position to his neighbour. This would have meant nothing to Lewis’ hero however, as Sir Dodinal (the Savage), was no baron but a lowly young peasant who had been taken into the round table’s fraternity when he was discovered exacting bloody revenge on the Saxons that had raided his village and slaughtered his family.

Lewis puts flashbacks to good use to explain Dodinal’s violent and bloody past, his uncontrollable rage, the strange attunement he has with nature and how he has earned his sobriquet ‘The Savage Knight’. These are just some of the reasons why he is the troubled man he is even after many years fighting at Arthur’s side. Now he has decided to leave Camelot and return to his place of birth, Wales, for Dodinal is looking for something but even he does not really know what that is, whether it be a final quest, a need to return to his roots or a honourable death. That something calls him to a little village on the Welsh Marches where he saves a strange young boy from a pack of hungry wolves and sets in motion a series of events that will test even the most bloodthirsty of the Knights of the Round Table.

Published by Abbadon Books The Savage Knight is 284 pages of daring do, chivalry and dark adventure.

Paul Lewis has written hundreds of comedy sketches for UK network TV, including Spitting Image, as well as radio sitcoms and plays. Paul co-edited the Cold Cuts horror anthology and is co-author of the novels The Ragchild and The Quarry, several novellas and numerous short stories including a Doctor Who contribution for BBC Books. Paul works as a journalist and lives with his wife and son in a village near Swansea, Wales.
Posted by Bob Lock at 9:55 PM